Self-oscillating crazy fuzz, featuring gate control mod to make it more controllable. If you feel the Fuzz factory wasn’t crazy enough this pedal is a must for you!

The Guys from DBA nailed a total unique and crazy pedal once again with the Supersonic Fuzz gun. This circuit presents a set of 5 knobs and a toggle totally interactive in between them that will divided the crowd in between those who love it and the ones that hate it, but will definitely provoke you to take a side on this, same as happens with the classic Fuzz Factory.
If we compare it with the Zvex circuit, I’d say the Fuzz blaster is even more unpredictable yet more flexible, that’s why we decided to add the Control trimpot to tame down the madness of the self-oscillation mode, or at least to give you a chance of controlling it.

Be the first to review “Fuzz Blaster” Cancel reply 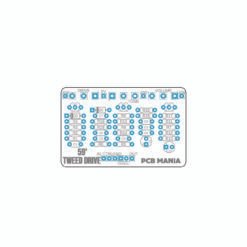 Based on Bogner Ecstasy Red and 7th heaven. Project overview: High gain JFET amp in a box. This circuit recreates the tone of Bogner Ecstacy's Red channel tube amp incorporating many elements of GoosoniqueWorx Seventheaven. The Bogner Red channel pedal does not directly inspire this project, but we can assure you it will melt your face off. 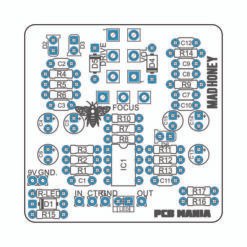 The Mad Honey is a touch sensitive low gain Overdrive; ideally suited to giving a clean sound a little pepper or for pushing crunch sounds. It is the dynamics provided by this pedal that make it convincing; the treble can be emphasized with the focus controller, distorting earlier without losing in transparency and dynamics.
New

Based on D*A*M Deluxe Meathead 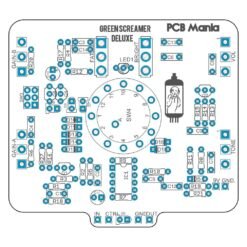 Dual channel Overdrive. The Green Screamer deluxe is a take on the father of all the overdrives, the Ibanez’s Tube Screamer. Difficulty level: Intermediate. Ammount of parts: Moderate Availability of componets: Average. All the components are pretty easy to get. The rotatory Switch is the only part that might be hard to find.